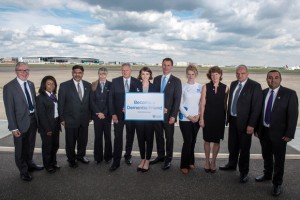 Heathrow’s ambition to deliver excellent passenger service is today being taken one step further as it announces its commitment to becoming the world’s first dementia friendly airport.

Heathrow is working with Alzheimer’s Society to change global attitudes towards dementia as part of the charity’s Dementia Friendly Communities programme. The airport has pledged to make all 76,000 people that work at the airport dementia aware through the provision of ‘Dementia Friends’ sessions, training and online resources.

The initiative, which is part of the Prime Minister’s 2020 Challenge on Dementia, encourages businesses to sign up to being dementia friendly so people with the disease feel understood and included. Heathrow is leading on transforming air transport in this area.

Worldwide over 47 million people have dementia, with this number projected to rise to over 135 million by 2050. In England alone it is a condition affecting nearly 700,000 people, touching the lives of over half a million carers and costing the UK £26 billion per year.

Working with Omniserv, who provide assistance for passengers with special requirements, Heathrow has already implemented a number of initiatives, which includes:

Creating training for all frontline staff and the wider Heathrow team based on Alzheimer’s Society courses, to ensure all employees have increased awareness and knowledge of how they can support passengers with dementia to travel
Training the frontline Special Assistance team, who regularly interact with passengers affected by dementia as ‘Dementia Friends’. With over 330 members of the team already trained and the rest of the 720 team being trained by the end of September
Inspired by the success of the “Parasport teams” deployed during the 2012 Paralympics; the STAAR (Senior Trained Additional Assistance Role) teams were created, these are PRM staff who have further enhanced training for passengers who have bespoke needs. The team look after passengers with hidden disabilities and have gone through bespoke training course, especially focusing on dementia, autism, deaf & blind passengers
Determining that security is an area where people with dementia need increased support and working with security guards to develop training to help reduce anxiety for passengers
Providing quiet lounges areas in the terminals

Chief Executive of Heathrow, John Holland-Kaye, said: “Our vision is to give passengers the best airport service in the world. Airports can be particularly stressful for passengers with dementia so we are delighted to be working with the Department of Health and Alzheimer’s Society to make sure that they get the support they need. We have started training our colleagues and making improvements so that we can be the world’s first dementia friendly airport”.

Heathrow’s commitment comes as Oscar-nominated actress Carey Mulligan has today been announced by the Alzheimer’s Society as their first ever Global Dementia Friends Ambassador. She recently joined Health Secretary Jeremy Hunt on a special visit to Heathrow where she led a ‘Dementia Friends’ session for staff with various roles from around the airport.

Jeremy Hughes, Chief Executive of Alzheimer’s Society, said: “Everyone has the right to be able to travel comfortably and with ease, and we all have a role in helping air passengers with dementia feel like they’re able to continue flying.

“Sadly, we know that travelling can be a daunting or frightening experience for many people affected by dementia – this can put people off travelling and in turn lead to them feeling socially isolated.

“Dementia Friends and Dementia Friendly Communities aim to change the way people think, act and talk about dementia. Alzheimer’s Society is delighted to be working with Heathrow on their commitment to become the world’s first truly global dementia friendly airport. We hope their pioneering work will pave the way for all airports the world over to transform the air travel experience for people with dementia and their carers.”

Secretary of State for Health, Jeremy Hunt, said: “We have made great strides in improving diagnosis rates, investing in research and creating the first dementia friendly communities, but we still have much further to go to promise everyone that they will be able to live well with the condition.

“The impact of dementia tears at families and at our social fabric. That’s why making progress is a key government priority, and Carey Mulligan will be a great asset both in raising awareness and promoting the benefits of the Dementia Friends programme – at home and globally.”