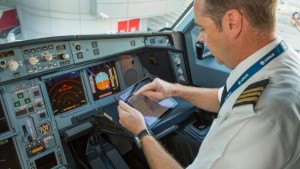 The Boeing 737-800 aircraft (registration VH-XZB) has re-entered commercial service, but will operate for a few months without the Wi-Fi being available.

In the meantime, Qantas and technology partner ViaSat will do a number of ground and inflight tests of the new Wi-Fi system before making it available for customers early next year. This follows several rounds of testing which have already been performed on the ground.

Qantas’ Head of Customer Experience Phil Capps said the hardware installation is an important milestone for the team.

“We are very excited that we are a step closer to introducing our fast and free inflight Wi-Fi,” said Mr Capps.

“Customers with a keen eye will be able to spot the satellite antenna, which is housed in a streamlined fibreglass radome on top of the fuselage, towards the rear of the aircraft. While we know that customers will want to connect to the Wi-Fi, we really do appreciate their patience while we go through our final testing process. We’re just as excited as them to roll this out.

“Putting Wi-Fi on board the aircraft has been an extraordinary task for the team. It requires a significant amount of testing to ensure that, first and foremost, the safety of the installation meets Qantas’ stringent standards, as well as ensuring the system will deliver the level of performance we expect at this stage of the trial.”

Qantas engineers in Brisbane installed the hardware which includes a satellite antenna mounted on top of the aircraft. It took 10 engineers approximately 900 man hours to complete – or the equivalent of 12 working days to install and test the new hardware. The hardware also includes multiple wireless access points, which means that all customers will have the same signal, regardless of where they are sitting on the aircraft.

The Wi-Fi service will feature speeds up to 10 times faster than conventional on-board Wi-Fi, giving customers the ability to stream movies, TV shows, the latest news bulletins and live sports.

In addition, the Wi-Fi will be of huge benefit to the pilots and cabin crew. Pilots will be able to access more detailed live weather data, which will help reduce turbulence, as well as making better use of tailwinds to reduce flying time.

Qantas is rolling out Wi-Fi across its domestic Boeing 737-800 and Airbus A330 fleet. The hardware fitout to the entire domestic fleet of B737 and A330 aircraft is planned to start in mid-2017, and is expected to be completed in 2018.

Qantas is also currently in talks with suppliers to extend Wi-Fi services onto its international and regional (QantasLink) fleets to develop a product that can overcome a number of technical, performance and coverage challenges, including options for Wi-Fi over large stretches over water, which will deliver a quality service that meets the expectations of Qantas’ customers.