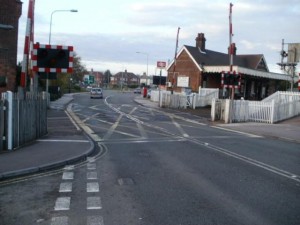 From Monday, 28 November, motorists in Oulton Broad North will wait for shorter periods of time at the level crossing on Bridge Road, when work is completed to move a critical signal on the railway.

Network Rail engineers have moved the signal, essentially the traffic lights of the railway, to a new location 50 metres down the track. This means that the level crossing barriers will not lower until the train is ready to leave the station. Previously, the barriers would lower when the train approached the station, so motorists had to wait longer, causing a backlog of traffic through the town.

Network Rail and Greater Anglia have worked together to devise a new timetable that also means there is no impact on journey time for train passengers.The scheme, which was delivered as part of Network Rail’s Railway Upgrade Plan, will bring significant improvements in journey times for motorists. The changes have been made in time for the December timetable change.

Richard Schofield, Network Rail’s route managing director for Anglia, said: “We listened to the community who told us that they were unhappy with the current waiting times at this crossing. Together with the train operator we’ve found a solution that benefits motorists and doesn’t increase journey times for passengers. We are committed to improving our level crossings as part of our Railway Upgrade Plan.”

“Well done to all involved – another example of great partnership working that is helping to really get things done in Lowestoft!”Peter Aldous , Member of Parliament for Waveney commented: “It was good to hear from Network Rail and Greater Anglia that the work at Oulton Broad North railway station that will enable the barriers to be down for a shorter period of time for trains coming from Lowestoft is largely completed and motorists will benefit from this in the next few weeks. This is an important element of work that will enable traffic to move more easily around Lowestoft.”

Colin Law, Leader of Waveney District Council, said: “I am very pleased that we are now some way towards a solution to the issues that cause delays for local motorists. I would like to thank Network Rail for their efforts and I hope that the changes will now create much needed relief and a reduction to the build-up of traffic.”