Photos show progress of new footbridge over the railway in Hertfordshire 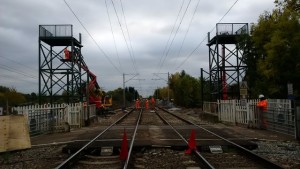 Work is well under way to create a new footbridge at Trinity Lane level crossing, Waltham Cross, to provide a safer way of crossing the railway as part of Network Rail’s Railway Upgrade Plan.

New photos reveal the extent of the work that has taken place over the past month to provide an alternative to using the level crossing when it closes to pedestrians later this month.

Over the weekend of 5 and 6 November, two stairwells were constructed, with the main bridge span due to be installed next weekend. The bridge is set to be finished and open for use by the end of November and from then on, the pedestrian wicket gates at the level crossing will be closed. The crossing keeper will control the opening and closing of the vehicular gates for cars, horses and pedestrians with limited mobility who can’t use the bridge.

Richard Schofield, Network Rail’s route managing director for Anglia, said: “When the work is finished, this bridge will provide hundreds of people with a much safer way of crossing the railway at Trinity Lane. I was very concerned with the number of incidents at this crossing earlier in the year and closing it and providing this alternative will significantly improve safety here as part of our Railway Upgrade Plan.”

The decision was taken earlier in the year to close the crossing following several incidents where pedestrians and cyclists crossed the railway in front of an oncoming train and an incident in July, where an adult and child were involved in a near miss.

There have also been incidents of crossing users wearing headphones or using mobile phones, which could prevent them from hearing an approaching train, groups of youths loitering on the tracks and one young person sitting and lying down on the crossing.

Pedestrians started using the crossing regularly during the 2012 Olympics to access Lea Valley Park and since then usage has increased at the crossing where trains pass at up to 85mph. The crossing now sees up to 700 pedestrians a day, and has become one of the most dangerous on the railway network in Anglia.