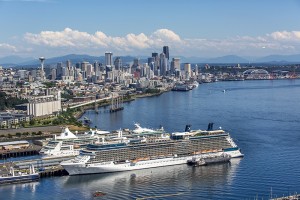 “It is an honor to be recognized by Cruise Critic for our cruise terminals,” said Commission President John Creighton. “We’ve made targeted investments over the years to ensure cruise passengers have a great experience while visiting Seattle.”

Cruise Critic Names the Best Cruise Lines of 2016
Cruise Critic®, the world’s leading cruise reviews site and online cruise community, has named the winners of its 9th annual Cruise Critic Editors’ Picks Awards, citing the best cruise lines of the year across dozens of categories, as chosen by the site’s international team of editors.

Best North American Homeport – Seattle
The Emerald City has long been known for coffee-slinging and fish-tossing at its lively Pike Place Market, along with its Space Needle skyline. Now, with the addition of a Central Link light rail system that services the downtown and airport areas, cruisers have more accessibility to Seattle and its many Pacific Northwest charms.