Primary pupils get the low-down on level crossing upgrades 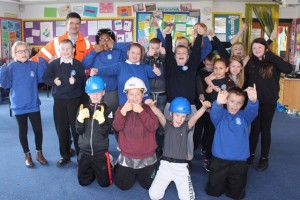 Network Rail has provided hundreds of primary school children with access to railway safety workshops to coincide with a series of level crossing closures and upgrades in East and Central Scotland.

The aim of the workshops, hosted by children’s drama specialists, is to give children confidence when using the railway and to educate them about the potential risks of trespassing and playing near the line.

The interactive workshops, which ran during October and early November, have been developed to encourage young people in Edinburgh and Stirling to make the most of the railway without taking unnecessary risks. They aim to promote safety messages through role play and active learning.Network Rail’s David Dickson, who is infrastructure director for the ScotRail Alliance, said:

“The workshops have been specifically designed by a children’s drama specialist to encourage learning through play. The initiative helps us to discourage trespass while encouraging responsible use of the railway.

“The most important aspect of these workshops is that pupils are, in the main, learning from their peers. Their collective knowledge is excellent and encouraging them to share their thoughts and experiences is an extremely positive, memorable method of teaching. The children have been full of energy, ideas and enthusiasm throughout and the feedback from pupils and teachers has been very positive.

“As we look to upgrade Scotland’s railway, we’re keen to explore more opportunities to educate children regarding railway safety. These workshops have a level crossing focus but we are keen to adapt the message as more work rolls out across the country.”