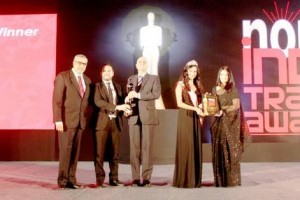 India Travel Awards honors stellar organizations and achievers from different segments of the industry, which included travel agents, tour operators, hotels, airlines, and state & international tourism boards. The winners of the awards were defined by a fair and unbiased selection process done through online voting and judged by a panel of jury consisting of the travel industry’s luminaries.

It is a very prestigious award, and we are proud to have won the award in ‘Best Upcoming Tourism Destination’ category. We are focused on promoting Ras Al Khaimah as a preferred choice of tourist destination, and an award such as this, further reinforces our motivation to work harder to increase India arrivals to the emirate,” said Mr. Haitham Matter, CEO, Ras Al Khaimah TDA. .

The northern UAE emirate recorded a 22 per cent rise in Indian hotel guests between January and September of this year when compared to the same nine-month period in 2015. During September visitors from India increased by 61 per cent against the same month last year. With India ranked as the emirate’s fourth largest international source market, RAKTDA has overseen extensive trade and promotional activities to ensure continued growth from the Sub-continent.