Self driving bus rolls out on Helsinki roads 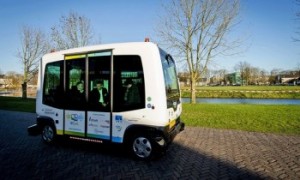 The public roads of Helsinki, Finland has a new guest as two self driving buses have rolled out alongside traffic and commuters, in one of the first trials of its kind.

In Pittsburgh a deal between Volvo and Uber means specially modified Volvo XC90 SUVs will be available for customer to summon, starting later this month.

The Easymile EZ-10 electric mini-buses, capable of carrying up to 12 people, will roam the open roads of Helsinki’s southernly Hernesaari district in a month-long trial, negotiating traffic for the first time.

The wider trial follows a successful pilot on closed roads in the neighbouring town of Vantaa during a housing fair.

Unlike most of the rest of the world, Finnish law does not require vehicles on public roads to have a driver.This makes Finland a hotbed of automated technology development and testing .

The commuters and other vehicles will provide challenging scenarios to the automated bus as the commuters can be unpredictable. The buses have a maximum speed of 40km/h but will travel at an average speed of 10km/h, making them unusually slow-moving vehicles during non-gridlocked times.

The automated buses are being seen as possible an extension of Finland’s public transport system, moving commuters into higher-volume transport systems where costs of alternative transport have proved prohibitive, rather than replacing all human-driven buses.