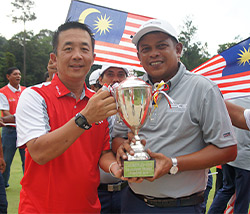 Old bonds were rekindled and new relationships made in the 2016 Causeway Cup presented by CIMB, staged at The Els Club Teluk Datai on October 5-7.

This was the ninth edition of the Ryder Cup-style event, played annually between Malaysian media and their Singapore counterparts. More than 40 players, representing a broad spectrum of print, electronic and digital media outlets from both sides of the Causeway, competed over three matchplay rounds at the award-winning Teluk Datai course designed by South African legend Ernie Els.

The first round consisted of eight fourball matches with the score tied at 4-4 after the end of play, while the second round saw eight foursomes matches being played with Singapore emerging tops by 4½ to 3½. The third and final round of 16 singles matches was an exciting affair with Malaysia chalking up 9½ points to Singapore’s 6½, putting the final score at 17-15 in Malaysia’s favour.

The event culminated in a grand prize-giving dinner at The Datai Langkawi, during which the trophy was presented by Singapore team captain Thomas Leow to his Malaysian counterpart Jonathan Ponniah.

While many participants flew back home on October 7, some took the opportunity to stay back in Langkawi over the weekend to enjoy the sights and sounds of the duty-free island.

“We would like to express our utmost appreciation to all the sponsors who helped make the 2016 Causeway Cup a huge success,” said Jonathan. “Both sides enjoyed this year’s event tremendously, especially since it was staged at a stunning venue like The Els Club Teluk Datai.

“Win or lose, we all had an amazing time and look forward to next year’s Causeway Cup which will mark the 10th anniversary of the event.”

The team sponsors for Malaysia were PG Performance Gear (Transview Golf) and Srixon, while Singapore were sponsored by BCLN Golf, TaylorMade and Apexlynx.

Following the country rotation, next year’s 10th anniversary edition of the Causeway Cup will be hosted by Singapore. Malaysia currently leads the series 5-4.