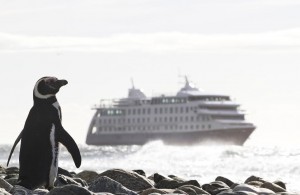 The debut date for the new expedition ship built for Patagonian cruise line, Australis, has been announced. The 210-passenger Ventus Australis will make its maiden cruise on January 2, 2018, as part of Australis’ 2017/18 season of ‘bottom of the world’ voyages to Cape Horn and the glaciers and fjords of Tierra del Fuego.

To mark the inaugural season of Ventus Australis – Latin for southern wind – Australis has frozen all fares for its 2017/18 Patagonia season, which will also include the line’s other ship, Stella Australia, with fares the same as those for the coming 2016/17 season.

Tailor-made for cruising on the southern tip of South America, Ventus Australis will replace the smaller, 136-passenger Via Australis, which the cruise line sold earlier this year. Ventus Australis will be a twin sister to the 210-passenger Stella Australis, offering panoramic, floor to ceiling cabin windows, a free open bar, complimentary, guided excursions, nature lectures and gourmet cuisine including local dishes and Chilean and Argentine wines.

From January 2 to March 29, 2018, Ventus Australis will offer 22 four-night cruises between Ushuaia in Argentina and Punta Arenas in Chile – the two southern-most towns in the world. Meanwhile, fleet mate, Stella Australis, will offer 54 sailings of three, four and seven-night durations from Ushuaia and Punta Arenas from September 30, 2017, to April 4, 2018.

The short cruises – an ideal add-on to a South American holiday – feature the spectacular mountain and glacier-lined fjords of Tierra del Fuego, the Magellan Strait and Beagle Channel and zodiac excursions ashore to places like Cape Horn, Wulaia Bay and Pia Glacier. An average of seven massive tidewater glaciers can be seen on most Australis sailings while wildlife along the way includes elephant seals and Magellanic penguins.

Australis is the only operator to offer regular cruises through the region, with the family-owned Chilean cruise line also offering more opportunities for travellers to step ashore on fabled Cape Horn than any other line.

Fares for four-night sailings aboard Ventus Australis in her maiden 2018 season are available from US$1800 per person, twin-share – pegged at 2016/17 levels. And fares aboard Stella Australis during her 2017/18 program start at US$1189 per person, twin-share, for a three-night journey – also pegged at 2016/17 fares. Prices include guided excursions ashore and beverages through an open-bar.