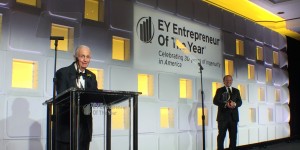 J.W.Marriott, Jr., Executive Chairman and Chairman of the Board of Marriott International, has been chosen by EY, one of the largest international accounting firms, to receive the 2016 EY Entrepreneur of the Year® Award in the Family Business category in the Mid-Atlantic region.

The EY Entrepreneur of the Year Award program celebrated its 30th anniversary. EY selected J.W. Marriott, Jr. for pursuing business excellence and his achievement in innovation, fiscal growth and serving his company and community. A panel of judges identified the Executive Chairman as an exemplary model of these characteristics and presented him the award at their gala held at Ritz Carlton, Tysons Corner on June 15, 2016.

Since 1986, EY has honored entrepreneurs whose ingenuity, spirit of innovation and discipline have propelled their companies’ success, invigorated their industries, and benefited their communities. Now in its 30th year, the program has honored the inspirational leadership of such entrepreneurs as Howard Schultz of Starbucks Coffee Company, Robert Unanue of Goya Foods, and Mindy Grossman of HSN. Recent US national winners include Reid Hoffman and Jeff Weiner of LinkedIn; Hamdi Ulukaya, founder of Chobani; and 2015 winners Andreas Bechtolsheim and Jayshree Ullal of Arista Networks.