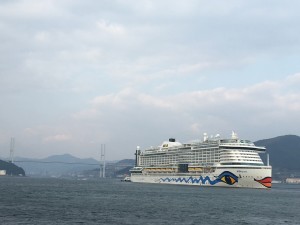 The new AIDA catalog for the travel period from March 2017 to April 2018 will appear on October 6, 2016 under the title: “HOLYDAY A NEW WAY.”. In 2017/2018, AIDA will offer cruises to 70 countries on six continents. The twelve ships in the AIDA fleet will set course for more than 215 ports around the world on 130 different routes.

The cruise company presented some initial highlights from its new catalog to the general public on September 15, 2016.

AIDA Selection
AIDA has developed a new range of vacations for cosmopolitan explorers: AIDA Selection. With this new program, the cruise line is following the wishes of guests to experience countries and people in a unique way by ship.

AIDA Selection stands for exceptional cruises on AIDAs first generation of ships: AIDAaura, AIDAcara and AIDAvita. These are characterized by fascinating routes to new regions and exclusive ports. On extensive onshore excursions, the guests of AIDAcara, AIDAvita and AIDAaura have the chance to discover impressive landscapes and cultures from a quite different perspective.

On board, they can enjoy the intimate, relaxed atmosphere and personal touch of AIDAs first generation of ships. An individually arranged entertainment program relates to the typical culture of the destinations concerned. In the restaurants, guests can expect an exquisite gastronomic range of regional specialties to complement the destinations visited.

All cruises from the new AIDA Selection program can be booked from 16 September 2016. On www.aidaselection.de AIDA not only presents all the cruises and the new on-board program, the cruise line also gives an introduction to the individual destinations and their inhabitants in a number of inspiring videos and interviews.

World cruise on AIDAcara
On October 17, 2017, it will be time to cast off for AIDAs first world cruise from Hamburg as part of the new AIDA Selection program. This will take AIDAcara to 41 ports in 23 countries on 5 continents over a period of 116 days before returning on 10 February 2018.
From Hamburg, AIDAcara will set course for South America. Dream destinations such as Rio de Janeiro (Brazil), Buenos Aires (Argentina) and Ushuaia in Tierra del Fuego are just a few of the stops before traveling from Valparaiso (Chile) to the Easter Islands.
The cruise then continues to Tahiti, Moorea and Bora Bora in the South Sea paradise of French Polynesia. Auckland (New Zealand), Sydney (Australia), The Great Barrier Reef, Bali, Singapore and the Maldives will make every explorers heart skip a beat.

By the way: the legendary British seafarer James Cook undertook three expedition voyages to the Pacific in the 18th Century. If the Suez Canal had already existed at that time, the itinerary of his first expedition (1768-1771) might well have been largely identical to that of the AIDA world cruise.

The AIDA world cruise on AIDAcara can be booked from just 11,995.00 p.p. (inside cabin, including the Early Booker Plus discount).

New routes – Indian Ocean
Another inspiring route in the AIDA Selection program: “Mauritius, Seychelles & Madagascar” on AIDAaura, also calling at Réunion Island. On all four islands, AIDAauras guests will have time enough to discover the impressive flora and fauna as well as the different cultures on extensive onshore excursions as the ship will moor overnight in Mahé (Seychelles), Saint-Denis (Réunion) and Port Louis (Mauritius). In Madagascar, AIDAaura will call at as many as three different ports, Nosy Be, Antsiranana and Toamasina.
The port of departure and destination for this impressive 14-day cruise is Mauritius. Seven departure dates can be selected between November 2017 and February 2018.
This cruise can be booked from just 1,295.00 p.p. (inside cabin, including the Early Booker Plus discount).

Since the end of April 2016, the Hanseatic City has been the all-year-round port of departure and destination for 7-day round trips on AIDAprima to the finest metropolises of Western Europe, including London, Paris, Brussels and Amsterdam. The ice-skating season will be opened on board on November 12, 2016. The sports weather deck on AIDAprima will then be transformed into a winter world, including mulled wine, also with a non-alcoholic variety.

From November 2017, AIDAprima will tour the islands of the Canaries & Madeira. With this cruise option, AIDA is following the wishes of many guests to also be able to experience the youngest member of the fleet at other popular AIDA destinations.
The ports of departure and destination for the 7-day cruises on AIDAprima are Las Palmas (Gran Canaria) and Santa Cruz de Tenerife (Tenerife). In addition to Gran Canaria and Tenerife, AIDAprima will also call at Madeira, Fuerteventura and Lanzarote.
The new AIDAprima cruises can be booked from just 640.00 p.p. (inside cabin, including the Early Booker Plus discount). Booking begins on October 6, 2016.

New ship: AIDAperla
Following the successful launch of AIDAprima, AIDA Cruises will welcome her identical sister ship, AIDAperla, as the 12th member of the fleet in 2017. From September 1, 2017, AIDAperla will set course for the pearls of the Mediterranean on four different routes.
The ports of departure and destination for the 7-day “Pearls of the Mediterranean 1 & 2″ cruises are the capital of the Germans favorite island, Palma de Mallorca, and Barcelona. On these cruises, AIDAperla will visit the island of Corsica, Florence/Livorno and Rome/Civitavecchia in addition to Mallorca and Barcelona. These cruises can be booked from just 930.00 p.p. (inside cabin, including the Early Booker Plus discount).

Lovers of culture will be thrilled by the “Pearls of the Mediterranean 3 & 4″ cruises. In addition to Florence/Livorno and Rome/ Civitavecchia, these also take guests to Marseille, where AIDAperla will moor overnight. The ports of departure and destination for this cruise are also Palma de Mallorca and Barcelona. Booking for all AIDAperla cruises begins on October 6, 2016.

Further details of the commissioning and christening of AIDAperla will be announced shortly.

From September 2017, AIDAbella guests will be able to discover the Mediterranean on brand-new 10 or 11-day cruises between Palma de Mallorca and Venice, also calling at Cagliari/Sardinia, Palermo/Sicily, Valetta/Malta, Corfu and Croatia (Dubrovnik & Split), for example.

From October 22, 2017 AIDAbella will cast off to take her guests on two 7-day and one 10-day Adriatic cruise from Venice. On November 15, 2017, AIDAbella will set course for Bangkok via Dubai. During the 2017/2018 winter season, the Thai capital will be the port of departure and destination for the 14-day “Thailand, Malaysia & Singapore 1+2″ cruises.

After the end of the current Southeast Asia season, AIDAbella will travel from Shanghai back to Europe in the coming spring, taking three exceptional routes. “From China to Singapore” in 16 days (04.03-04.19.2017), calling at legendary metropolises such as Shanghai, Taipei, Hong Kong, Ho Chi Minh and Singapore as well as the exotic beaches on Hainan in China and the Vietnamese coastal city of Da Nang. An AIDA premiere is the fabulous Ha Long Bay in Northern Vietnam.

The journey continues for a further 18 days “From Singapore to Dubai” (04.19-05.07.2017), with the stops including Malaysia, the Maldives, India and Oman.
The finale – from Dubai to Mallorca non-stop in 13 days. On this “AIDA pure” cruise, the AIDAbella guests can enjoy boundless relaxation and an exclusive onboard program with fantastic shows and guest artists, interesting workshops, a superb culinary experience and exclusive wellness packages. An absolute “must” for seafarers is the passage through the Suez Canal.