Avinor Oslo Airport On The Rise 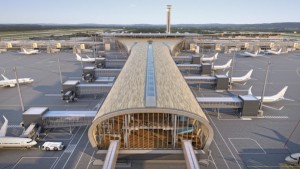 Opening 27 April 2017: operated by Avinor, Oslo Airport’s state-of-the-art extension and new pier will mean Norway’s main gateway will be able to handle up to 30 million passengers per year, increasing the capacity by more than five million passengers.

As one of the fastest-growing cities in Europe, and home to some of the world’s most frequent flyers, the capital city airport is rapidly expanding to accommodate its rising popularity.
“With rapidly growing traffic in boomtown Oslo, and projected strong long-growth trends, the city is emerging as the international hub for Norway and around Scandinavia.” Jasper Spruit, Vice President Traffic Development, Oslo Airport.

Scandinavian travel with a ‘wow’ factor
When the new Oslo Airport officially opens next April, following six years of construction, Avinor will have built a new pier, an extended central terminal building and a new, fully integrated station hall for the Airport Express Train and Norwegian State Railways (NSB). Encompassing a true Scandinavian experience, the design of the terminal building will enhance the travellers feeling of arriving to a Nordic capital.

With functionality the first and foremost priority for its passengers and partners, the new design ensures the airport remains efficient and practical. Travellers will have the opportunity to travel on the airport trains to the central terminal building, while the new North Pier will provide carriers with 11 aircraft stands, nine of which will be flexible gates enhancing the capacity of each by 25%.

As the airport’s international route network grows, the East Pier will also be expanded to facilitate long-haul operators and their passengers.