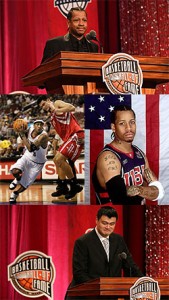 Mission Hills Group has announced that NBA superstar Allen Iverson will attend along with fellow Basketball Hall of Famer Yao Ming on China’s Hainan Island for the fourth edition of the World Celebrity Pro-Am golf tournament on October 20-23.

Known for his unique style and personality, together with a reputation for being one of the top combo guards in NBA history, Allen ‘The Answer’ Iverson will add yet more celebrity glamour to an all-star line-up at the 2016 Mission Hills World Celebrity Pro-Am that includes Hollywood superstar Michael Douglas, tennis legend Boris Becker and footballing great Ronald de Boer.

Also heading to tropical Hainan Island for the ground-breaking pro-am golf tournament will be home-favourite Yao Ming, who was enshrined into the Basketball Hall of Fame alongside the American Iverson earlier this month. “It was an honour to be inducted into the Class of 2016 with Yao, who has done so much for the globalisation of our sport,” said Iverson, an 11-time All Star and former league MVP. “I can’t wait to join Big Yao in Hainan for the World Celebrity Pro-Am. Having enjoyed many good battles on the court, it will be great to have some fun together on the golf course!”

These iconic sportsmen and entertainment stars will be gracing the fairways of the signature Blackstone Course at Mission Hills Resort in Haikou alongside golfing greats Gary Player, John Daly, Mark O’Meara and Rich Beem – winners of 14 Major Championships between them – plus an equally impressive foursome of LPGA Tour stars in Suzann Pettersen, Anna Nordqvist, Paula Creamer and Natalie Gulbis.

The eight elite golfers will be competing over two rounds of individual stableford for a prize purse of US$ 1 million, with US$ 250,000 going to the winner. They will also be playing alongside their celebrity partners and vying for team honours.

Now in its fourth edition, the biennial Mission Hills World Celebrity Pro-Am was established in 2010 as Asia’s first and only pro-celebrity golf event. This sporting and entertainment extravaganza aims to help grow the game of golf in China through star-appeal and global coverage – reaching more than 26 television channels in Greater China and over 200 countries worldwide – whilst also raising funds for local causes and promoting Hainan Island as a tourist destination.