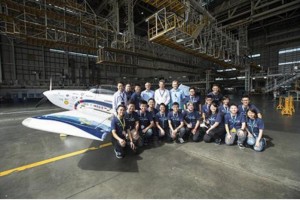 Cathay Pacific and its staff have applauded the magnificent achievement of Captain Hank Cheng and the Inspiration team following the successful completion of his epic round-the-world journey onboard his homebuilt plane.

Hank made local aviation history by circumnavigating the globe in “Inspiration”, a
single-engine RV-8 light aircraft, a flight that covered approximately 50,000 km and
took in 20 countries, including Australia, the United States, France, Jordan, Oman,
13 November 2016.

Sri Lanka and Thailand, before landing at Hong Kong International Airport at around
10 am today.

Before his arrival in Hong Kong, Hank flew low over Victoria Harbour, providing
members of the public with the opportunity to share in the spirit of the occasion. The
city certainly gave “Inspiration” a warm welcome, with people turning out in force to
capture the moment; their photos, videos and positive comments of the B-KOO-
registered aircraft proving overwhelmingly popular across many social media
platforms.

Hank’s historic, near three-month journey has been reliant on the professional
support of the Inspiration team, a dedicated group of Cathay Pacific employees who
have worked round-the-clock, monitoring the flight’s progress from the Inspiration
Operation Centre, which is housed at Cathay Pacific City, the airline’s headquarters
at Chek Lap Kok. In addition, inspired by Hank’s passion to reach out for his aviation
dreams, numerous colleagues across the airline’s expansive global network, from
airport staff, engineers, flight crew to back office staff, have provided him with
invaluable support, underlining the teamwork and can-do spirit of Cathay Pacific.
Cathay Pacific Chief Operating Officer Rupert Hogg said: “We are extremely proud
of what Hank and all our employees involved in the Inspiration project have achieved
– this is an historic moment in Hong Kong aviation and we could not be happier that
their dreams have been realised.

They have proved to be wonderful ambassadors
for Cathay Pacific and local aviation as a whole, showing fantastic spirit, true
professionalism and tremendous enthusiasm throughout. This is a very special day
for everyone at our airline and it is great to see what can be done when we all work
together.”

The Inspiration project has garnered significant interest – both from the public and
aviation aficionados – and Hank has been eager to educate people about aviation
and promote Hong Kong at every stage of the journey – two of his key objectives.

For example, soon after completing the most arduous leg of his trip – a 14+ hour
transpacific flight from Hilo in Hawaii to San Carlos in California – Hank travelled to
the Future of Flight Aviation Center at Boeing’s headquarters in Everett, Washington,
where he shared the background and goals of Inspiration with enthusiasts at a well-
attended learning session.

Another instance of Hank’s passion for espousing aviation and his home city came
a few weeks later, when he made headlines in Karachi. Through arrangements made
by Cathay Pacific staff, and after receiving a very special welcome and generous
treatment upon landing in Pakistan’s most populous city, he gave a series of media
interviews, sharing the experiences of his flight and promoting the pioneering spirit
of Hong Kong.

The Inspiration project has won the respect and admiration of Cathay Pacific staff
members the world over, with the team receiving a great many messages of support
from across the airline’s network, highlighting the airline’s tight-knit international
community. A colleague regarded the tour as, “A dream for you, and for many of us
too … that becomes true,” while another emphasised the positive effect Inspiration
has had on his family and the younger generation: “My boys are inspired by your
achievement.

They carry your aircraft registered red lanyard B-KOO on their school
bags and share your inspiring story to all their classmates!”
Added Mr Hogg: “Hank and the Inspiration team represent the spirit of Cathay Pacific
and Hong Kong. We congratulate them all on this major milestone and are thankful
for being able to play a role in helping to fulfill their dreams.”