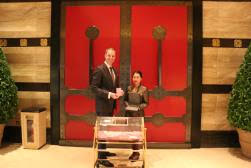 As a Diamond sponsor of the campaign for the fourth successive year, the hotel offered its guests a series of ‘PINK experiences and collectibles’ between 1 to 31 October.

Conrad Macao also acknowledged the support of ARTĒ Madrid, a renowned Spanish jewellery design house with a boutique at Shoppes at Venetian, who helped make this year’s fundraising campaign even more successful by donating an ARTĒ classic White Stones Necklace featuring synthetic white stones and paved on 925 sterling silver plated with rhodium. Guests who stayed at the hotel during the campaign and purchased a PINK upgrade package, including making a donation, were entered in the prize draw to win the beautiful necklace. With more than 250entries received during the campaign, the lucky winner was announced on 3 November.
Hotel guests were able to support 2016 ‘PINK Inspired’ campaign in a variety of ways: by making a MOP10 donation upon check-out, enjoying a PINK Inspired Afternoon Tea experience, opting for PINK room upgrades, or purchasing an exclusive Conrad Pink bear or rubber duck. The hotel’s award-winning signature restaurant Dynasty 8 also featured a special PINK menu.

One of the highlights of the campaign this year was a Pink charity lunch co-organised with the International Ladies’ Club of Macau (ILCM) on 20 October, with emcee Hong Kong television host Sean Lee-Davies and guest speaker Ms Kerri-Anne Kennerley, an Australian television celebrity. More than 260 guests, all dressed in various shades of pink, dined on a Pink-themed menu. Guests were able to purchase raffle tickets to win more than MOP120,000 in prizes, thanks to the support of many retail partners at Sands Shoppes Cotai Strip Macao, including T Galleria – DFS, Butani Jewellery, Versace, Kate Spade New York, M Missoni, amika, Sabon, Kwanpen, LUSH Fresh Handmade Cosmetics, TWG Tea, and Rockport.

“I would like to thank all our guests, customers and team members who helped to make this year’s ‘PINK Inspired’ campaign so successful,” said Bede Barry, General Manager of Conrad Macao. “Our gratitude also goes to many of the luxury retailers at Sands Shoppes Cotai Strip Macao and our sister hotels around the world for their generous support of our PINK Inspired charity lunch, and the valuable help of the International Ladies’ Club which we meant we were able to reach our fundraising target sooner than anticipated. We look forward to building the momentum and making next year’s campaign even more successful.”