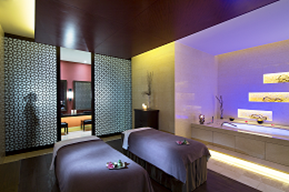 Conrad Macao, Cotai Central’s award-winning Bodhi Spa has added yet another accolade its already long list of awards after recently being announced as Macau’s Best Resort Spa at the prestigious 2016 World Spa Awards.

The World Spa Awards are held annually to recognise luxury spas around the world for their innovation, quality and service. It is a dynamic awards programme launched in 2015, designed to drive up standards within spa and wellness tourism by rewarding leaders in their fields. Voting is based on service excellence and both professionals within the industry and spa fans are encouraged to vote for their favourite spas.

The concept was developed in reaction to overwhelming demand from the spa industry for a programme that was fair and transparent, and would serve as the definitive benchmark of excellence helping to foster a new era of growth in spa tourism.

“This is spa tourism’s highest accolade and we are honoured and delighted to receive recognition for Bodhi Spa,” said Bede Barry, Vice President, Hotel Operations. “A record number of votes were received this year, with results based on votes cast by leading spa tourism professionals as well as thousands of consumers worldwide. It is particularly gratifying that our commitment to excellence has been identified by both the industry as well as guests.”

Bodhi Spa already offers leading international brands including high-end Thalgo from France which derives its products and inspiration from the sea, and as part of its new menu has partnered with renowned UK skincare make Aromatherapy Associates, which uses the finest quality, premium grade essential oils in its holistic therapies. Meanwhile, manicure and pedicure treatments are performed using OPI, and hair care products come from top US manufacturer Paul Mitchell.

Couple’s rooms are equipped with foot baths, vitality bath and a steam room, offering unique treatments that pamper with scrubs, massage, facial and body treatments.
Offering a contemporary experience that also reflects ancient traditions, Bodhi Spa is Macao’s only spa to provide signature Ayurveda treatments and also embraces European and Asian concepts. A common reflexology room has room for six, and offers manicures and pedicures, ideal for relaxing with friends. A hair salon is also located within Bodhi Spa and offers a full range of services including colouring, treatments, cuts and blow dries.