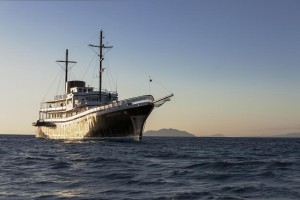 Contours Travel is offering last-minute savings of up to 35 per cent on cruises through the nature-rich Galapagos Islands for the remainder of this year, enabling Australians to explore one of the most biodiverse regions on the planet.

A world-renowned nature sanctuary, Ecuador’s Galapagos Islands were made famous in 1835 by naturalist Charles Darwin who visited the archipelago as part of a five-year voyage which led to his iconic study ‘The Origin of Species’. While observing the local wildlife, Darwin found that some animals separated from their mainland population had adapted to their environment, eventually changing to become new species. Today, the islands boast more than 26 species found nowhere else on earth, including giant Galapagos tortoises – the largest in the world, with some measuring more than 1.5m in length.

The offer from Contours Travel – the longest-running Latin American travel operator in Australia – features a range of eight day cruises that bring nature lovers face-to-face with the island’s diverse wildlife, known for its lack of an instinctive fear of humans, including land iguanas, flamingos, waved albatross and the striking blue-footed boobies. Guests will travel onboard the MV Evolution, a 32-passenger expedition yacht providing spacious staterooms and social areas while ensuring guests can experience nature in an up-close and personal way.

The cruise begins on Baltra Island in the Galapagos, before journeying to Isabela Island, where guests can snorkel and spot colourful fish, sea lions, penguins and sea turtles in the water. The ship will then sail on to Bartolome Island, famous for Pinnacle Rock, where guests can hike the island’s summit and be rewarded wth spectacular views of the volcanic landscape and crystal blue waters of the bay. Guests will then visit Santa Cruz Island with its white-sand beach, Las Bachas – a major egg-laying site for sea turtles, Dragon Hill – named for its large land iguana population, and the Charles Darwin Research Station.
The final days of the cruise will be spent cruising to Espanola Island, the southernmost island of the archipelago known for its impressive wildlife population, and San Cristobal Island, home to the Galapagos National Park Visitor Centre, which will provide an illustrated overview of life on the islands, a fitting epilogue to the cruise.

The eight-day cruise costs from A$5507 per person, twin-share, on selected departure dates, which is a $2600 saving on the original price. The deal is valid until sold out on cruises departing October 22, November 5 and December 10 and 17. Guides, activities and hire of snorkelling equipment and wetsuits are included. Flights from the South American mainland and Australia are additional and can be booked through Contours Travel.