Day of the Dead at Four Seasons Hotel Mexico, DF 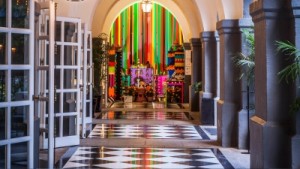 Four Seasons Hotel Mexico, DF opens its doors to Colección Serpentina with an offering created for the Day of the Dead, inspired by Mexican tradition with special Four Seasons and Serpentina touches, in which the design, the colours and the creativity are a very essential part of the just renovated Hotel.

The elements of the offering are very traditional: the bread for the dead, hot chocolate, Mexican food and Siete Misterios mezcal . The Bread of the Dead is prepared daily in the Hotel’s ovens with an artisanal technique, including the traditional version with sugar, and new versions filled with chocolate and cream that are available in a limited edition until November 6, 2016.

The menu that ZANAYA offers in these days is also a special one for this season.

“All the dishes are inspired in Nayarit, because they are typical of that zone. In our offering, we put the favourite foods of the people we love who are no longer with us, so their spirit can come and enjoy what they used to like in life. We normally put some typical dishes of our region, and that is why we choose Nayarit dishes,” says Marco Bueno, Sous Chef of Zanaya.

The ZANAYA menu consists of a shrimp tamal, typical of the Acaponeta region; tlaxtihuil with shrimp meat balls, a pre-Hispanic recipe very common on Mexcaltitán Island; and chicken Picha, named in honour of Jerónima Reyes, known as “La Picha,” who started selling this type of chicken in 1920, and it is still very popular.