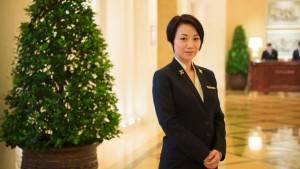 One of the few local female Macau residents in the organisation, Freda first joined Les Clefs d’Or’s Macau chapter in 2014; she gained full membership in October 2016.
“We are very proud of Freda’s achievement in Les Clefs d’Or, a great honour for both Freda and our Hotel,” says Kris Kaminsky, General Manager of Four Seasons Hotel Macao, Cotai Strip. “We are thrilled that Freda has gained international recognition for her high level of professionalism and excellence by Les Clefs d’Or, and we feel privileged to have Freda as a part of our team.”

Born and raised in Macau, Freda furthered her studies in Canada. In 2011, she joined Four Seasons Hotel Macao as the Front Office Assistant Manager. She subsequently became the Manager of Concierge Operations in 2012; due to her outstanding performance and attention to detail, along with a good sense of humour and helpful persona, Freda was promoted to Chef Concierge in 2013.

“The best part of my job is meeting so many wonderful guests, who inspire me to continually learn about unique Four Seasons offerings and how we can enhance their stay,” says Freda. “Being a part of Les Clefs D’or will further support our efforts in being a valuable resource to our visitors.”
Established in 1952, Les Clefs d’Or awards new members with the crossed gold keys, an honour reserved for a highly select number of service professionals who continually demonstrate the highest level of care for their guests. The distinctive keys are worn on the lapel of Les Clefs d’Or members, readily identifying the bearer as a true professional in their chosen career.
As a leading global hotel group, Four Seasons Hotels and Resorts believes that the key to its success lies with its people. The group is thus committed to nurturing its talents in all destinations where it maintains a presence, so that Four Seasons guests only enjoy unrivalled experiences underpinned by caring and attentive service.