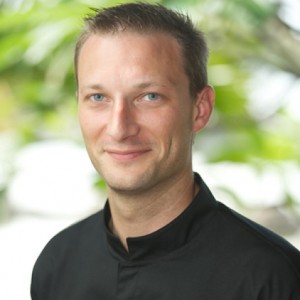 His new position will allow him to keep a protective eye on his protégés based in the White City.

Born and raised in Brittany, France, he discovered his passion for gastronomy in his mother’s kitchen. From a young age he was blessed with unique culinary talent, a passion for cooking and an exquisite taste allowing him to artistically combine flavours, spices and textures into beautiful masterpieces. He built his experience through luxurious and worldwide culinary experience spanning regions such as France, Egypt and Mauritius.

Thierry has had good fortune accessing Four Seasons-quality products in Morocco – particularly seafood. Having grown up around the sea on the coast of Brittany, he really knows seafood, and local suppliers respect his knowledge.

Inspired by local produce, traditions and people, Thierry surprises epicureans by his audacious fusion of flavoirs. A strong believer that guest satisfaction being essential, Thierry is continually striking for perfection and innovation, a personal philosophy that Thierry will share soon with his entire new team to implement a new dimension in all the dining venues at the Resort. Along with Chef Papillier, Four Seasons Resort Marrakech looks forward to welcoming guests for new exciting extraordinary dining experiences.