A friendship festival between Thailand and Japan in Khun Yuam district 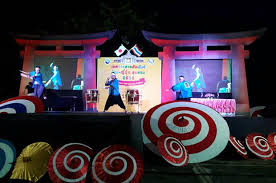 The 4th Thai-Japanese Friendship Festival took place in Khun Yuam district on Sunday to promote tourism between Thailand and Japan. The opening ceremony was jointly chaired by Wirun Phanthawee, the deputy provincial governor and Hisao Horikoshi, the acting consul-general at the Japanese Consulate in Chiang Mai.

An agreement was signed after the ceremony between the Thai and Japanese governments. The agreement says that Japan will grant a 2.7 million Baht for humanitarian purposes, for buying ambulances and medical equipment as well as 2 million Baht for a school for hill tribe students. Origami, Japanese martial arts, dances and musical shows were part of the two-day event. There were also stalls for food and souvenirs. Along with that, a Miss Thai-Japanese Friendship beauty contest was also held.

The Khun Yuam district has historical ties with Japan during World War 2 with many Japanese soldiers remaining in the district after the war. The festival ends on Monday, September 19th.