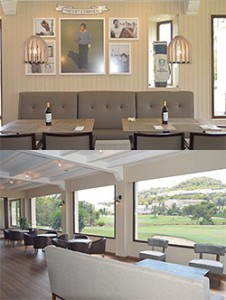 Gary Player, Arnold Palmer and Severiano Ballesteros all played key roles in La Manga Club’s glamorous and evolving history, and the famous Spanish resort has paid homage to the legendary golfing trio as part of its eagerly-awaited new-look golf clubhouse.

The golfing icons were integral to La Manga Club establishing itself as one of the world’s elite sports and leisure destinations, and have been fittingly honoured by the Murcian resort in its newly refurbished and rebranded 37 Spike & Sports Bar.

Player was La Manga Club’s first director of golf in 1972, Palmer won the 1975 Spanish Open at the resort and later redesigned its prestigious South Course while Ballesteros was the venue’s touring professional between 1980-85, and the three golfing superstars have each had a corner of the sports bar dedicated exclusively in their honour to celebrate their achievements.

As well as enjoying rare photographs of the trio in action, members and guests can also view priceless pieces of memorabilia including one of Spanish icon Ballesteros’ La Manga Club-logoed golf bags which he used during the pinnacle of his career, when he won four of his five Major titles.

In addition, the redesigned bar features an inviting new décor, new seating and improved menu, which guests can sample while enjoying spectacular sweeping views of the resort’s North Course and Hotel Principe Felipe.

The 37 Spike & Sports Bar is one of a number of improvements that La Manga Club is carrying out to upgrade its food and beverages service this autumn, including the reopening of its famous Piano Bar after a summer refurbishment programme.

And the significant investment in its golf and leisure facilities, which has also included the redesign of its pro shop, the purchase of a new golf buggy fleet and refurbishment of its five-star hotel, has seen the resort win a number of top recent industry honours.

Having been named as Spain’s best golf hotel at the World Golf Awards for the last two years, La Manga Club was voted best golf resort in Spain by Today’s Golfer readers for the fifth year in a row earlier this year while it was selected as one of Europe’s top golf resorts in Golf World magazine’s inaugural list of the ‘Top 100 Resorts in Europe’ this autumn.

Set across an area of 1,400 acres, La Manga Club has been at the forefront of European sports and leisure destinations for more than four decades and is widely regarded as Spain’s flagship resort.

Guests can stay in a choice of the resort’s four-star Las Lomas self-catering apartments or five-star Principe Felipe Hotel, while La Manga Club offers more than 20 bars and restaurants and its own Mediterranean cove beach.