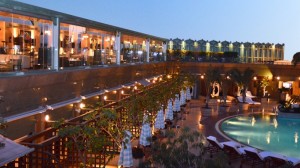 As with most major sporting events, Upper Deck Lounge at Four Seasons Hotel Cairo at Nile Plaza has been turned into an amazing fanzone with its fully air-conditioned and comfortable lounges, each with its own 52’’ screen and sound system showing all the UEFA Euro 2016 action live. That’s not all; Upper Deck outdoor terrace is also available to soak in the amazing views of the pool plus a 65’’ screen, meaning fans won’t miss a kick no matter where they choose to sit.

The culinary team has prepared special family set menus to enjoy Iftar and Sohour while watching one’s favourite team. With the cheering and heightened tension each match brings, calm nerves with a cool drink or choose from the extensive selections of shisha flavours.

For those interested in watching the matches in the privacy of their rooms, Four Seasons Hotel Cairo at Nile Plaza offers incredible room rates in one of its luxurious rooms.