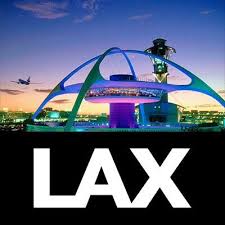 On August 28, 2016, at approximately 8:40 pm, Los Angeles Airport Police officers immediately responded to Terminal 7 Lower/Arrivals Level public area regarding reports of a man dressed in black with a sword, wearing a mask.

Believing the subject was armed with a sword, several Airport Police officers approached him with weapons drawn out of an abundance of caution. The man was detained, questioned and released. Airport Police determined the sword was plastic.

Immediately following, Airport Police began receiving reports of an active shooter in Terminal 8. Word spread quickly through the terminals by word-of-mouth, social media, and additional calls were made to Airport Police about an active shooter in other terminals, with some reporting having heard gunshots. Many passengers and employees evacuated onto the airfield and into the Central Terminal Area roadways. An investigation, that included review of closed-circuit television footage, revealed that no shots were fired. Airport Police continues to investigate what caused the incident.

Terminals 1, 4, 6, 7 and 8 were impacted by passengers evacuating or going through federal security screening checkpoints without proper screening. Airport Police temporarily closed both Upper/Departures and Lower/Arrivals level roadways. Passengers who passed through emergency exits onto the airfield were gathered and either bussed or directed to a safe location.

LAX Airport Operations requested a ground stop on the south runway complex shortly after 9 p.m. due to passengers, who self-evacuated from the terminals, running onto the restricted airfield. The ground stop was lifted by 9:30 p.m. Airport Police officers methodically cleared all impacted terminals with explosive-detection K-9 units before passengers and employees were allowed to enter the terminals to be rescreened. The Central Terminal Area roadways were reopened at approximately 10:30 p.m.

During the 30-minute ground stop, 27 arriving flights diverted to other airports, 12 of which diverted to Ontario International Airport. By early Monday morning, passengers from only one diverted flight had yet to arrive at LAX. Airlines reported that the total number of delayed arriving and departure flights is estimated at approximately 281 (120 arrivals and 161 departures). Airlines reported two cancelled flights.

During the incident, Airport Operations employed for the first time the Los Angeles County Wireless Emergency Alert (WEA) system at the onset and end of the emergency response portion of the incident. The WEA system distributed public safety messages to all smartphones within a 5-mile radius of the airport. LAX Airport Operations staff also provided audio announcements and visual messaging inside and outside the terminals. Changeable message signs leading into and along Central Terminal Area roadways were regularly updated with information for motorists. LAX Guest Experience Members (customer service representatives) provided passengers with water and information, and remained past end-of-shift to facilitate passengers arriving on delayed international flights. Concessions also stayed open past closing time in order to serve passengers on delayed departing flights. Transportation Security Administration and Customs & Border Protection staffs continued past end-of-shift to process delayed departing and arriving passengers.