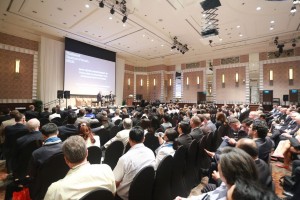 Thailand Tourism Forum (TTF), an influential annual gathering of top hotel industry professionals in the Thai capital, will be held on Monday January 23, 2017 at the InterContinental Hotel Bangkok.

Now in its sixth year, TTF is organised by Thailand’s American Chamber of Commerce (AMCHAM) and C9 Hotelworks with support from InterContinental Hotel Group and continues to position itself as a key platform for hospitality business leaders and tourism experts to candidly discuss the state of the industry.

The upcoming edition of TTF will focus on how Thailand’s tourism sector can adapt and maintain a strong, long-term growth trajectory while embracing disruptive trends that range from the sharing economy to a significant growth in millennial domestic travellers.

Despite global economic woes, extreme currency fluctuations and considerable domestic challenges, Thailand has continued to see a steady increase tourist arrivals through 2016. The Tourism Authority of Thailand recently announced that the country is on track to exceed arrival targets for this year, which will generate more than THB 2.58 trillion (USD $73.7 billion) in tourism revenue for the country – up 14% from 2015. Even amid such a positive big picture outlook, persistent challenges remain for Thailand’s hospitality sector. For hotels, there’s the constant task of maintaining ADR and achieving respectable RevPar in an increasingly competitive regional marketplace; for destination-focused businesses there’s the need to remain agile and fresh in a constantly evolving travel landscape. These demands and market dynamics will be analyzed by expert presenters and debated via lively panel discussions at the Thailand Tourism Forum 2017 during a full afternoon programme that flows into a well attended networking event.

“In a world of instant updates and ever-changing travel technologies, trends and attitudes, it’s more important than ever to be an innovative player in the industry,” says Bill Barnett, Managing Director, C9 Hotelworks, one of the event’s founders and organizers. “TTF 2017 will focus on key statistics and emerging trends. It will also showcase some of the powerful new Thai regional destination brands that have emerged in recent years, and consider how new ideas and aspirations are reshaping hospitality.”

Underlining the importance of new generation thinking for hotels and hospitality businesses in Thailand, TTF will this year welcome Vorasit ‘Wan’ Issara, Managing Director of Sri panwa, a member company of Charn Issara Group. Sri panwa is one of Thailand’s leading luxury hotels and Wan is very active in the Group’s hospitality undertakings which also include Baba Beach Club Hotel in Phang Nga and Baba Beach Club Hotel in Cha Am – Hua Hin.