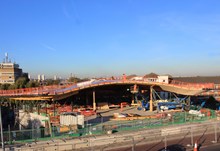 The roof has been constructed using a combination of 31 tonnes of steel beams and girders to support the loads of the beams. The main timber beams are each 45m long, which is the equivalent of four London buses end to end.
Network Rail began work at Abbey Wood in 2013 to build the new landmark station, renew existing track and build the new Elizabeth line infrastructure. The work to the existing track is now complete and considerable progress has been made to the station building. The area of the new concourse, which is now built, measures 1500m2 and is the size of six tennis courts.

Network Rail will now focus efforts on installing the zinc covering of the roof which will sit on top of the wood. Work to the station building will continue until autumn 2017 when the station building will be complete.
Matthew Steele, Crossrail Programme Director at Network Rail said: “We are really proud of the progress being made on the new station and railway infrastructure at Abbey Wood. Once the Elizabeth line opens in 2018, it will transform journeys for passengers in the area. In the meantime I would like to thank local residents and businesses for their patience whilst the construction work is underway.”

Matthew White, Surface Director at Crossrail said: “After so many years designing the new station and preparing for the work, it’s fantastic to see this new, elegant timber roof taking shape. The arrival of the Elizabeth line represents a once in a generation opportunity to transform Abbey Wood, helping to create jobs and attract business and investment to the local area.”

Abbey Wood Councillor Denise Hyland, Leader of the Royal Borough of Greenwich said: “Abbey Wood station is a vital transport hub for the Royal Borough helping to bring jobs, growth and fast connections both in and out of London. It is only right that this expanding station and soon-to-be new home to the Elizabeth line has such an architecturally impressive roof befitting of the 21st century transport facilities it delivers.”
Councillor Teresa O’Neill OBE, Leader of the London Borough of Bexley said: “The new Elizabeth line station at Abbey Wood is set to become an iconic local landmark that will highlight the exciting new opportunities that are on offer in our part of the capital. Improved transport infrastructure is key to unlocking the new development that Bexley and London need.”

The new station will open in late 2017 for Southeastern services and Elizabeth line services will begin in December 2018 when journey times to a number of central London destinations will be halved.
Source:-Network Rail