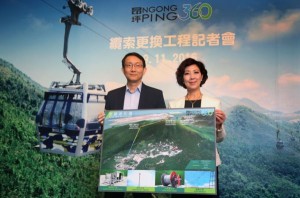 As a world-class tourist attraction in Hong Kong, Ngong Ping 360 upholds safety first by investing significant resources in the maintenance of our cable car system.

We have formulated and executed short-, medium- and long-term maintenance strategies, with the aim of providing a safe, reliable and comfortable cable car service for our guests.

Established in 2006, the Ngong Ping Cable Car is the longest bi-cable ropeway in Asia, with a total length of 5.7 km in one way. The cable car system comprises a track rope and a haul rope. The track rope is the guardrail that supports the weight of the cabins, and the haul rope is responsible for pulling the cabins, making them move along the track rope. The bi-cable design effectively reduces energy consumption and the number of support towers required, ensuring a more stable and comfortable cable car journey. As the cable car system operates in an outdoor environment for long periods, during the construction stage, the overseas manufacturer placed approximately 10 years of back-up rope – close to the limit of our storage capacity – in reserve at the cable car terminal to facilitate regular rope shifting and ensure that the track rope would operate in optimal condition.

The Ngong Ping Cable Car has now been operating for a decade since the opening in 2006. Rope replacement is a normal and necessary process for a bi-cable ropeway, and takes place at regular intervals in all similar cable car systems around the world, such as Austria’s Mayrhofen and Italy’s Seis-Seiseralm, as determined by factors such as utilisation, the surrounding environment and adequate supply of back-up rope. We understand the importance of cable car safety and reliability, as well as the design features of the track rope. In 2014, Ngong Ping 360 had conducted a related study with overseas rope experts. Given that we have to take a number of factors into account, such as the schedule of the overseas rope experts, rope manufacturing time and liaisons with relevant government departments and the overseas manufacturer to formulate a detailed replacement programme and schedule, arranging a timeline for the maintenance project does not have much flexibility.

We are also trying to avoid typhoon season during the project period to uphold a high level of safety and efficiency. According to the Hong Kong Observatory’s records for the past 8 years, no typhoon signal has ever been reported in Hong Kong from January to mid-May. Therefore, we are now working hard to start the rope replacement project in early January 2017. The whole project, which will last for approximately 5 months, is targeted for completion in early June 2017. We will announce the project’s start date a few weeks before it commences. To ensure public safety and facilitate the project’s requirements, the Ngong Ping Rescue Trail will not be open to the public during the replacement period. Ngong Ping 360 sincerely apologises to any affected guests, the public and stakeholders.

Mr Weller Chan, Project Manager of the rope replacement project, explained, “the rope replacement method to be adopted in the project is based on a currently established scheme that will be further modified by our European rope manufacturer according to the overall condition of the Ngong Ping Cable Car system. The principle method is using old rope pulling new rope. Meanwhile, taking into account the limitations of the surrounding environment, including country parks, Tung Chung Bay and the Hong Kong-Zhuhai-Macao Bridge Project, a number of safety measures will be adopted to ensure that the project can be completed safely and efficiently”.

To increase transparency and enhance public understanding of the project, we will invite the media to conduct on-site interviews on one of the project dates under safe conditions.