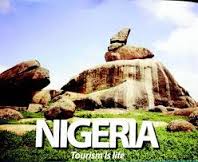 In order to further discuss modalities for actualizing the proposed tourism village in Bwari Area Council, the Chairman of the latter visited the Nigerian Tourism Development Corporation (NTDC) with his team.

A meeting was held between Musa Dikko, Chiarman of Bwari Area Council and Director General of NTDC Sally Mbanefo.

Mbanefo noted that tourism remains a value chain that touches every sector. She feels that the proposed tourism village holds a lot for the people in the area in terms of economic empowerment through job creation.

Dikko, in response, lauded the domestic tourism development and promotion drive of NTDC and described his Area Council as the tourism hub of the Federal Capital Territory (FCT). He further noted that it was the only Council in the FCT that has played host to global personalities because of the location of Ushafa Pottery Village in the area as well as the popular Lower Usman Dam.

Mbanefo expressed the need to continue to focus on the country’s production capacity by investing in sectors of the economy that are labour intensive such as tourism, agriculture and manufacturing to improve the nation’s economy.