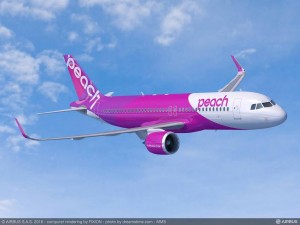 Airline to become first low cost carrier in Japan to operate A320neo.Japan’s Peach Aviation has signed a firm order with Airbus for the purchase of 10 A320neo and three A320ceo aircraft.

The order was announced at a signing ceremony in Tokyo attended by Shinichi Inoue, Managing Director and CEO, Peach Aviation and Fabrice Brégier, Airbus President and CEO.

The aircraft will join Peach’s existing A320 Family fleet of 18 A320ceo with another two on order.With the addition of the A320neo, the airline will become the first low cost carrier (LCC) in Japan to operate the latest member of the popular A320 Family.

“Our A320 fleet is growing as our route network expands, not only in the domestic market but also to various Asian cities,” said Shinichi Inoue, Managing Director and CEO, Peach Aviation. “By introducing the A320neo to our fleet we will enhance even further our profitability while continuing to offer our passengers greater comfort with 18-inch wide seats. We believe that the A320neo will strengthen our position in the competitive Japanese aviation market.”

“We are pleased that Peach Aviation has placed this additional order for the A320 Family,” said Fabrice Brégier, Airbus President and CEO. “This further strengthens the position of the A320 Family as the aircraft of choice including the low cost sector in Japan. We are honoured by the confidence Peach Aviation has once again placed in our products and are sure that the A320 Family will contribute to the airline’s ongoing success as it expands its domestic and regional markets.”

The A320 Family is the world’s best-selling single aisle product line. To date, the Family has won about 12,800 orders and more than 7,250 aircraft have been delivered to some 400 customers and operators worldwide.

The A320neo Family incorporates the latest engines and aerodynamic enhancements, delivering more than 15 percent in fuel savings from day one and by 20 percent by 2020. With some 4,800 orders received since its launch in 2010 from 88 customers, the A320neo Family has captured over 60 percent market share in its category.

Featuring the widest cabin in the single aisle market, all members of the A320 Family offer unmatched comfort in all classes with 18” wide seats in Economy as standard. With one aircraft in four sizes , the A320 Family seats from 100 to 240 passengers, seamlessly covering the entire single-aisle segment from low to high-density domestic to longer range routes.