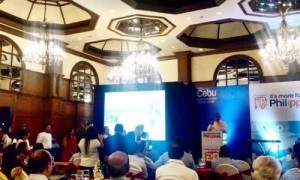 The Department of Tourism (DOT), Philippines conducted a roadshow named ‘Visit the Philippines Again (VPA) 2016’ in Kolkata on 8th August at a hotel, in its sustained efforts to promote the region as a tourist locale in India.

At the event, Ms. Buensuceso said that India is the 13th largest market in the Philippines with 74, 824 Indians visiting this archipelago last year. She added that since Kolkata is a key market in the eastern India, they were keen to create links with the local travel partners belonging to the city. By 2017, Philippines expect to attract 1,00,000 Indian travellers, according to her.

She further added that Philippines is a cultural destination with a strong sense of community, and highlighted some of the most popular tourist destinations in the country like Palawan, Boracay and Cebu.

Mr. Glen Agustin echoed the statements of Ms. Buensuceso, speaking about the islands of Cebu, Bohol, Boracay, Palawan, Davao as well as the capital of Philippines, Manila. He enlightened attendees about the various soft adventure activities that are popular in the islands and also water sports like kite-boarding, reef-walking, hobie cat racing and kayaking.

Next, he spoke about how there is more to Philippines than just being a holiday destination, thanks to its contribution to luxury travel, small group travel, weddings and most importantly, MICE.

Last but not the least, Mr. Agustin said that Philippines is expecting to draw an increased number of visitors in 2016 by the AJACSS UK visa relaxation policies at international airports.