Planes collide on Jakarta tarmac as wing erupts in flames, no casualty 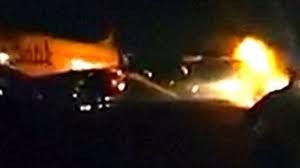 In a freak accident, two planes collided on the tarmac at an airport in the Indonesian capital Jakarta, leading to a wing of one of the aircraft bursting into flames.

Indonesia has had a dismal air safety record amid a boom in air travel, particularly with budget carriers.

The incident took place at the largely-domestic Halim Perdanakusuma airport in Jakarta, causing the temporary closure of the airport. The Batik Air plane was carrying 49 passengers and crew, media reports said..

A Batik Air passenger plane was taking off when its wing clipped the tail of a TransNusa aircraft being towed across the runway. However, there were no injuries said authorities in the Monday night incident, and all passengers were evacuated to safety.

A spokesman for budget carrier Lion Air Group, which owns Batik Air, said the pilot had aborted the takeoff after the collision, and passengers and crew were safe.

In 2013, a Lion Air plane came down short of the runway at Bali’s Denpasar airport and crashed into the sea, in an incident that hospitalised at least 22 people. That same year another Lion Air plane skidded off a runway on the island of Sulawesi after it crashed into a cow.

In 2014, an Indonesian subsidiary of AirAsia flying from Surabaya to Singapore crashed into the sea, killing all 162 onboard.