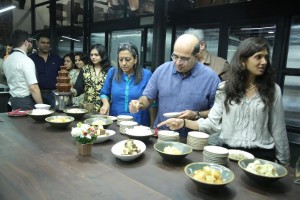 Leading travel trade agents from Mumbai gathered at the Magazine Street Kitchen to an event hosted by Rhaetian Railways. It was a close-knit dinner, which was attended by thirty-five travel trade partners, including the Consul General of Switzerland, Mr. Martin J. Bienz.

The guests were greeted with fine European wine, a wide range of home-made cheese and freshly baked bread, hand-picked by celebrity Chef Alex Sanchez of ‘The Table’, who also curated a special menu for the event. The venue was a walk-in kitchen where the guests could interact with the chefs and watch them wield their way through the pot and ladle; at the same time the guests kept networking with each other. Later in the evening Chef Alex addressed the guests, taking them through the menu and explaining each course.

Special care was taken that every element at the evening had a Swiss connect, as Rhaetian Railway is a Swiss mountain railway network, operating the well known Glacier express and Bernina express in the Graubünden regions. As per the theme of the evening, the tables were divided into the Glacier and Bernina express and guests were handed train-tickets to their seats. The guests thoroughly enjoyed each course of the meal and were in for a pleasant surprise, as they were greeted by a delicious set-up of chocolate fountain fondue on their way out.

Speaking on the occasion Ms. Sonal Salian, Market Manager India, Rhätische Bahn said “We are extremely grateful to our travel trade partners who have supported us all through the year; this event was a token of appreciation and also to give everyone an experience of Swiss opulence and precision which is synonymous with the brand.”

The Rhaetian Railway is a Swiss transport company, owning the largest network of all the private railways in Switzerland. The company operates most of the railways in the Swiss canton of Graubünden as the Swiss federal railway company SBB-CFF-FFS extend only a few kilometres over the cantonal border to the capital at Chur. Almost the entire network is in Graubünden and can be explored with Bernina Express, Bernina Express Bus and Glacier Express. In 2008 the fascinating Albula – Bernina line was recognized officially as UNESCO World Heritage.