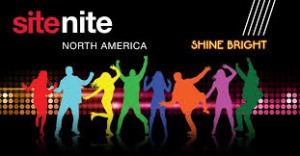 Every year SITE Nite North America brings together more than 1200 of the travel and hospitality industry’s most influential leaders making it the must-attend party to kick-off IMEX America in Las Vegas.

This year attendees will Shine Bright during the event, taking place Monday, October 17. For the second year in a row, SITE Nite will be held at the amazing Omnia Nightclub at Caesars Palace– one of Las Vegas’ hottest nightlife attractions. Registration opened August 3rd and will sell out fast!

“The Omnia was a huge hit last year with two floors of inside nightclub space, as well as a large outside terrace facing Las Vegas Blvd. Due to popular demand, the party has been extended from two hours to three hours with drinks included for the first two hours and a cash bar for the third hour,” shared Ron Warner, SITE Nite Chair and regional director of sales, Melia Hotels International. “In line with the Shine Bright theme, we are asking attendees to wear bright-colored clothing. Prizes will be awarded for the brightest of the bright. We are also developing a mobile app and will request that guests post profile pictures to allow suppliers and customers to easily identify each other at the event. To encourage networking, we will be running a contest asking attendees to post selfies of customers and suppliers who are meeting for the first time. The person who submits the most selfies will win a prize.”

During SITE Nite attendees will be invited to bid on unique travel experiences to rival the best the incentive travel industry has to offer – everything from urban explorations and relaxing beach vacations to exotic adventures and action-packed cruises across the globe. Auction 2.0, a major fund-raising initiative supporting SITE Foundation, will commence in early September and be open through the end of IMEX America. A raffle will also be held during SITE Nite for an amazing, once in a lifetime trip so come prepared to buy raffle tickets.

“SITE Nite continues to reign as the most sought-after event during IMEX America week, providing unparalleled networking coupled with a Customer/Supplier ratio of nearly 1:1,” said Denise Dornfeld, SITE Foundation president and chairperson, Allied PRA. “The SITE Foundation’s largest fund-raiser, last year the event sold out in hours and raised nearly $200,000 to support research and education on incentive travel trends and best practices. We extend our appreciation to all of our returning event sponsors and attendees who support SITE Nite.”