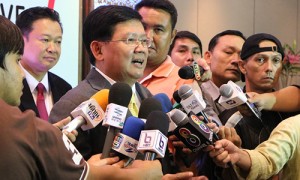 The Bureau of the Royal Household has announced that during the 100-day Royal Funeral Rites, the general public are allowed to pay respect and write messages of condolence to

To facilitate members of the public to travel to pay their respect to His Majesty King Bhumibol Adulyadej, the Ministry of Tourism and Sports in collaboration with the public and private tourism sector is providing transportation and preparing special arrangements, starting from 17 October, 2016, as follows:

1. For members of the public wishing to travel to the Sala Sahathai Samakhom Pavilion at the Grand Palace, in the Sanam Luang area, the Thai Transportation Operators Association, the Tourism Authority of Thailand (TAT) and the Royal Thai Police are providing free bus services from 17-24 October, 2016, 08:30 – 15.00 Hrs. The hourly bus services cover four routes, starting from the National Stadium, Victory Monument, Wongwian Yai BTS Station, and the Bangkok Bus Terminal in Talingchan, to Sanam Luang.

2. For members of the public in the Ramkhamhaeng area and within the vicinity of the Sports Authority of Thailand who are unable to visit the Sanam Luang area, they will be able to pay their respect and write messages of condolence in front of the late monarch’s portrait at the Sports Authority of Thailand’s Commemorating His Majesty’s 7th Cycle Birthday Anniversary Building. In addition, the national broadcast of the 100-day prayers during the Royal Funeral Rites will be made available on two large LED screens in front of the Building. These broadcasts will begin on Monday, 17 October, from 09.00 Hrs. onwards.

In addition, the number of trains coming to Bangkok has been increased to 150 from 132. The State Railway of Thailand began adding extra carriages and extra trains for free to Bangkok from Friday, 14 October, 2016, onwards. An additional 64 carriages a day are now available on trains operating between Bangkok and the surrounding provinces. For more information, please contact the State Railway of Thailand Call Centre at 1690.

During the period of national mourning, TAT would like to advise that some festivals and activities in the kingdom may be cancelled or postponed. Other events will go ahead as planned, but may be toned down as a mark of respect. We would like to recommend that any visitors with travel or tourism plans reconfirm with agents and check local media regularly as well as follow the advice of the local authorities for announcements and updates. Also, please check directly with the respective organisers on the status of events.