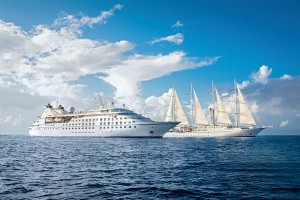 As leaves continue to fall and old man winter prepares his blustery breaths, boutique, small ship cruise line Windstar Cruises defies the impending shiver – relocating its yachts from Europe to the glittering light of the Caribbean and Central/South America for the winter and early spring and continuing its season-defying weekly sailings (year-round) in lovely Tahiti.

Yachting in the Tropics. It’s the elegant answer to yearly winter blues. While clocks shifting back signal the start of the “dark season,” Windstar is charting a course this month for warmer waters while accepting several awards for its unique style of small ship cruising, making clear that no other cruise line can touch the company when it comes to enjoying the sun-soaked beaches of the tropics in romantic style.

“We hear time and again from readers about how much they love the tall ship experience aboard Wind Surf, from the amazing dining and service to, of course, the romance of it all,” said Bill Panoff, publisher and editor-in-chief of Porthole Cruise Magazine. “From the line’s tall ships to its luxury yachts, veteran cruisers truly relish the unique journeys that Windstar Cruises offers.”

Meanwhile, Cruise Critic®, the world’s leading cruise reviews site and online cruise community in both the United States and the United Kingdom, names Windstar “Best for Romance” in the Luxury Category of their 2016 Editors’ Picks Awards.

“Windstar’s masted sailing yachts have long been favorites with honeymooners and couples of all ages. Breathtaking sailaways, alfresco dining and late-night stargazing all create an air of romance. Now that Windstar has added three yacht-style ships, the romance comes indoors, too, with spacious suites and several lounges for evening entertainment or a tête-à-tête over drinks,” the editors raved.

Also on newsstands in the November issue, SHAPE Magazine gives a nod to Windstar in its 2016 Healthy Travel Awards, lauding the company as a Best in Cruise and ranking it “Tops in Activities.” Editors were most impressed by the cruise line’s unique water sports platforms, which are unmatched in the tropics with unlimited and complimentary access to snorkel gear, stand-up paddle boards, kayaks, and more. The experience is a brand differentiator and guest favorite amenity on board the yachts.

Lastly in the November issue “awards sweep” for the company, Condé Nast Traveler’s 29th annual Readers’ Choice Awards place Windstar as one of the top five Small Cruise Lines (with under 500 passengers). Over 300,000 dedicated readers – nearly twice as many as last year – cast votes for 7,394 hotels, 606 cities, 500 cruise ships, and 236 islands, crowd-sourcing the 1,402 best travel experiences in the world.

“We are thrilled to be recognized by our guests, travel experts, and editors for the unique and romantic experiences we offer on board our iconic small ships,” said President John Delaney in response to the bevvy of recognition. “We are dedicated to visiting quaint harbors perfectly suited to small ship cruising and creating a warm, intimate ambience that you simply won’t find on larger cruises, and I think that’s pretty special. It’s exciting to hear that others think so too.”